Some students who come out of the GCSE English Literature examinations saying one thing; “that was easy, Sir.” They say this for one of two reasons. Either they have revised, worked hard, been taught well and done well in the examination, or they have rushed the question, not revised as well as they could do and done what they think is a good answer, but one that will in fact get them no higher than a G or an F in old money, or a 2 or 3 in the new ways of marking the thing.

So, how well did you do today?

My student that I tutored read and studied three texts: Charles Dickens’ Great Expectations, Shakespeare’s Macbeth and the great play, An Inspector Calls. He says, in round about words that the questions for his first exam were as follows [might not be word for word]:

Macbeth: How is Lady Macbeth portrayed in the sleepwalking extract? How is guilt shown elsewhere in the play?

An Inspector Calls: What is the significance of money in the play?

How did you answer these if you took this exam board question?

It was the first Edexcel examination so seeing this might give you some tips if you need a resit in November, or if you are looking at this next year and trying to figure out how the hell to answer such a question as these. The fact that he was unable to give me the Dickens question is a bit of a bind, for it is my favourite novel of all time, but that is for the second examination and so there is still time for me to write a later blog piece.

So here goes on the two from today.

Given the fact that I have not been given the exact text to work from it is difficult to see where it starts and where it finishes but the fact that it is a separate two part question says a lot. Normally, you would answer the first question and be expected to say something about the guilt she feels in the rest of the play in your answer. But here, they have split it to make it easier and so you will see the need to write [using those lovely PEED chains] about both sides of the question.

What would you include? Well, in the first part, you might write about the following:

Guilt in the rest of the play

In the end, there is so much guilt to choose from. Here are just a few ideas for you to consider. They are not meant, if you took the exam today or whenever it was and you then read this and think oh dear, I did not put half of that in, to annoy you. If they do, then apologies from the outset, but they are meant to make future learners think about the depth of their answers.

Guilt is resident throughout this play. It is there because the writer, Mr Shakespeare himself, wanted us to think of certain themes like this. He was writing around the time of the arrival of James 1st onto the throne in England and Shakespeare is almost saying what would we need to do to get rid of a monarch? How could it happen? It is pure conjecture of course, but can be seen as a muse for writing. The history of the Scottish battles, found in different texts [Holinshead Chronicles] will have had some influence as well. It is even possible to see the previous Queen, Elizabeth 1st, as being partly an influence. She is a strong woman in a man’s world and knows what it means to be so. With these and other possibilities, it is possible to run out of paper in an examination very easily.

But what of An Inspector Calls?

What is the significance of money in the play?

Written as a social criticism at the time against capitalism and its insidious activities in our lives, this play is a critique of how the rich treat the poor, how the employer treats the employee in a time before British benefits systems were invented. You worked and you got money to live. You didn’t and you ended up in the Workhouse. Sad, but true! Very Dickensian, I know, but true.

So to see a writer defining the importance of money in one’s life, one has to write an essay in terms of how one group of people in the play see money and how the other sees the need for it. The question is begging for you to compare the rich and the poor and their attitudes to income.

Here are a few ideas for you…

There is so much more I can think of and that is without looking at the text in full, or revising it. I have not read it or taught it for about ten years, but they are the things that bounce back into my memory because it is such a memorable little play.

So how did you do?

I hope in August that you find out and it is good news from both Lit exams. When you take the next one, in a few days time, remember what is said here about depth and detail. Then it is time to revise for the Language exams in June and knock them into the stands when you answer. Remember, for all your English exams, write using those lovely PEED chains where needed and do not stop writing, for the more you can offer to the examiner, the better chance you have of scoring higher than predicted. If you only offer one page when there are four or five given for you to use, then do not expect much more than a 3. 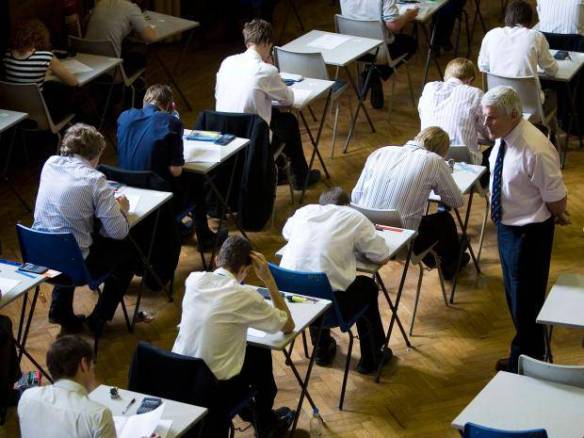 It is up to you now. Time to get revising!